I am very excited about this project I'm about to share with you, as I've been wanting to do something like this ever since the G45 Steampunk Spells range was first released. But I needed to get my hands on it first! lol.
Anyway, I'll get right to it then... It's not finished, as such, but it's as finished as I can make it until after Halloween, when I will add photos and extra embellies (that would cover part of the photos and are therefore awkward to add now, lol).

First of all, the front cover. All the chipboard pages were painted black before starting, which seemed the thing to do with it being a Halloween themed book. I chose a pretty paper to work with as a base (how lush are the colours of this range... I mean, really!), and then fussy-cut and decoupaged elements from some of the other papers  to add some dimension. Add a border and a sentiment sticker, and some punched flowers with a metal steampunk charm and voilà! I'm actually very pleased with the cover. It's hard to tell, but the spellbook I mounted on thick card and then stuck on with foam tape, so that also pops off the page. 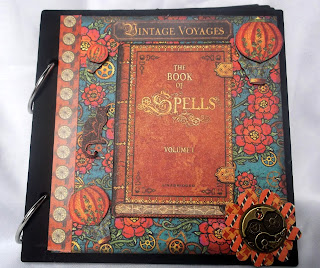 Next it's the first two pages, which turned out to be oranges. The black mats are where the photos will go once I've taken them! lol. 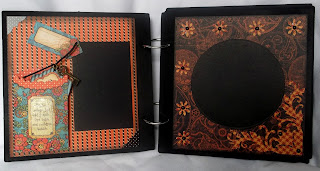 I love this little pocket and it was perfect for adding a tag (with a charm, of course! And a little room for writing on.). I also added the "double, double" image and painted it over with crackle paint. 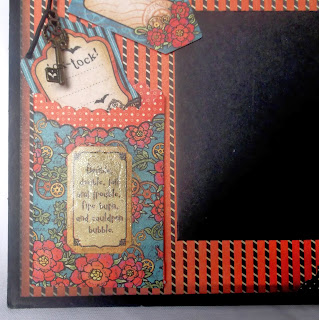 I love this next page, even if it's fairly simple. This backing paper is one of my absolute favourites in the range. I threw in some punched flowers and some black pearls (ohhhh, managed to get a "Pirates..." reference in there. Go me!) and a Spellbinders corner flourish. 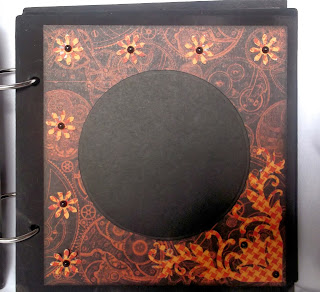 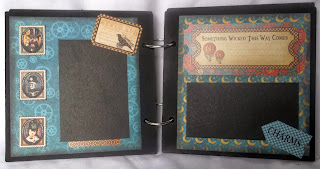 I adore these postage stamps, which I fussy-cut from one of the papers and the raven "tag" is also so cute. And useful too, as I'll be able to add a word or two about the picture on it... 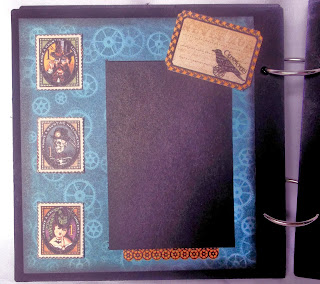 Lots more space for writing on this next one. 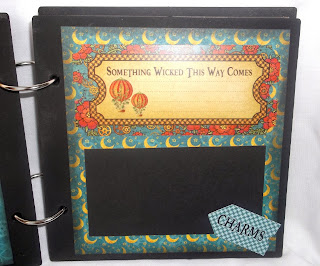 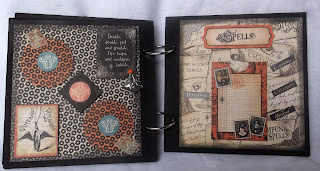 this is probably my least favourite page... But I was very pleased with the "lift the flap" idea for the photos... 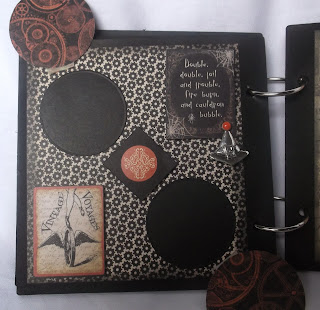 And isn't this next paper just delicious? It's one of the ones that screams "Harry Potter" to me. The pocket can be written on, and a photo will be added on a tag to slide into the pocket. 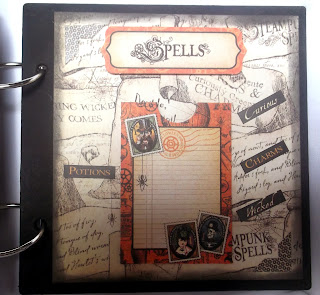 And the back. I was going to just leave it as just the paper, but my daughter came down to see, and she insisted the sticker had to be added, so there it is. 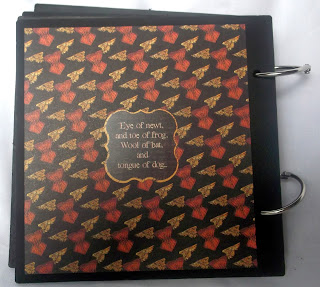 And hey presto! One steampunk spells Halloween mini photo album ready for photos!
I plan to add a few other bits and bobs, such as a clasp of some description for holding the album shut and I intend to paint the rings black too, and hang a load of ribbon and charms off them. But all that will happen after Halloween.

I'd love to hear your thoughts on this, and ideas on how to improve on it for next time (because there will be a next time. Oh yes, I have the mini-album bug!).
And can I just state for the record that I am officially in love with G45? The papers and other items are of such high quality and, of course, gorgeous!

I'd like to enter this project into the following challenges:


Have a most fantabulous weekend!

This is fabulous Sammy, such beautiful colours and so many brilliant details. I think that painting the rings black will finish the look perfectly.
Have fun adding your Halloween photographs and little finishing touches.
Pauline
x

Sammy thanks for asking me to give some feedback. Firstly if this is your first album, well I had better watch out, it's wonderful. I think you have layered well and even done the wee hidyhole bit, which is great as it keeps folk guessing finding all the wee nooks and crannies. Consider using a black ink around every thing, black helps the cut outs lift off the paper, in particular when using the flower paper consider if the top layer would pop out more if black cardstock was layered below it. Even the page where you cut out the stamps personally I may have lifted them off the page with card stock and also foam dots. It's all about depth and layers to help take the eye around the page. I hope this has been helpful. Well done, be very chuffed with yourself, it's great x

Thank you ladies for your lovely comments, and a huge thank you Pauline for your words of wisdom! There's a lot of sound advice there and I will certainly bear it in mind when I next have a play. I have so many more things I want to do with this range... and others! lol. x

Great project Sammy. Bet you will have fun filling it with piccies and bits and pieces xx

This is well out of my range of creativity, Sammy, and it blows me away! I must have spent ten minutes just staring as I scrolled down and back, down and back! Just stunning!! Darnell

Wow Sammy, you should yell at me for not coming over here sooner. This mini album is absolutely gorgeous!!!!! I will say, however that your daughter is right. The sticker on the back just makes it all the more fun. I love how you have made your cover look like a book. The papers are so rich in color and I totally love the way you have put each and every page together. I have never made a mini album like this, but as I have a cinch I think I really should have a go at this. You really rocked it!!! :)) Thanks so much for coming over and joining my blog. I am hoping that work will settle down a little soon so that I can get to know my new followers even better. You are so sweet to keep coming over and leaving such nice comments. That is really what keeps me blogging. I love meeting all the new people and getting to be friends. I think this whole community is just so nice and I can't believe that I have been doing it now for 4 years. I truly hope you have a nice weekend. We are having one of our last warm days here in Washington state, so we are enjoying it so much. I can't figure out where you are from. Can you let me know, I keep a map up and put marks on it so I can envision where everyone that I talk to is. lol... I was never good at that in high school, but some 30 years later it truly is interesting to me and my 15 year old daughter loves to point it all out to me. Hugs, Lisa G

This is such a great project and will look even better with the photos, well done and thanks for playing at Crafty Ribbons

So great album! Thanks for joining our challenge at Scrapper's Delights!
Anne Lise

This is awesome. Thank you so much for sharing your lovely creation with us at Paper Crafting Journey.

What a fabulous mini album! Love it! Thanks for joining us at DCD this week!
Gerda
http://cardscreations.blogspot.com

Sammy, thank you for the visual description of your mini book. I have to admit I have never attempted anything so spectacular. I love your paper colors.

Wow! So much detail.
Lovely!
Thanks for entering my challenge at Crafty Ribbons Challenge
Laura

This is fantastic, such a lot of hard work has obviously gone into and it shows! I love all the Halloween colours and the different themes on each page!

Thank you for joining us at PunkYouGirl!

Wow! You did a great job Sammy, what a fabulous mini album :o)
Hugs
Tracey
xx

Love your mini album! This must have taken you hours to complete. Love the vintage feel. Thanks for playing along with us at The Crafter's Cafe Challenge Blog & good luck!
'Shell
http://shellscardhaven.blogspot.ca

Hello dear Sammy! Your first mini is truly wonderful and this Graphic45 paper looks fabulous in it.
PS - Thanks for your lovely comment on my blog :)

Fabulous album! Thanks for joining us at Crafts 4 Eternity this week hugs x