WE are having a BLOG HOP as well as a Challenge this fortnight!

This year our theme is - BABIES!

We have some wonderful sponsors who have generously donated lots of goodies for you and our wonderful Hilde also has a freebie to give to you to use for the challenge if you want to - go to the main blog for this.

Our Sponsors for this Blog Hop are listed below but the twist is that they are associated with each individual member of the Design Team's blogs, so you need to go to their blog and follow the instructions to be in a chance to win. There is a prize for the Challenge winner as well and our normal TOP THREE awards. You do not have to go in the BLOG HOP as well as the Challenge, but what else have you to do with your time? Of course you will enter both!! However, you do have to be a member of this blog to be eligible for the Challenge and Blog Hop prizes.

Flourish with a Bling Prize:

six digis for the winner  - hiding away on CG's blog

Sammy, Susan and Wynn are being sponsored by Meljen

Wynn and I are both offering a surprise prize of our own!


The way you can hop is by thinking of numbers! Go to each Design Team's blog, read the clues and THINK OF NUMBERS while you do this! Remember - our theme is BABIES, so what do Babies have related to NUMBERS?

There may be a small amount of poetry in there........but I am sure you will be able to work that all out! You collect a word or maybe a whole phrase from each blog along the hop and you need to make sure that
Leave a comment on the main blog as well as entering your own Baby themed project into the Challenge on the  Crafting with Dragonflies . Also follow the instructions on the main blog to finish off the hop from there.

Order of the HOP

Now then... Now that all the technical stuff is out of the way, I shall share some pictures, a story or two and, oh yes, a card with you!

First of all, I'd like to introduce you all to my daughter, Kayleigh. Not as she is now, all teenage-y and whatnot, but as she was when we first brought her home: 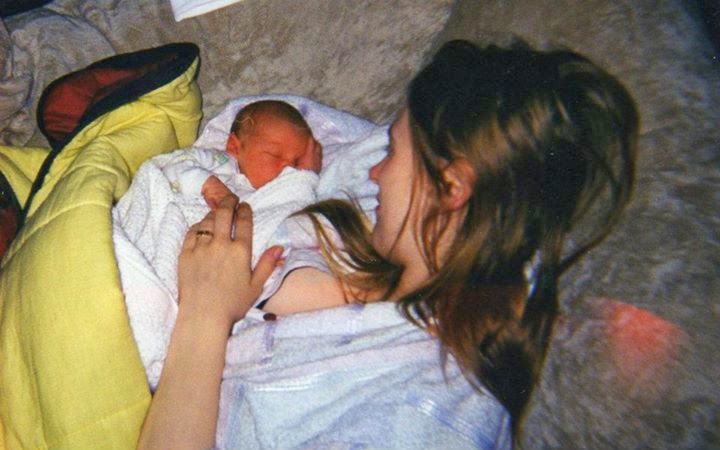 Adorable, wasn't she? And oh so very tiny! It was hard to imagine, nine months before, that this tiny little person would instantly become the centre of my life. but that she did!

Now, you may wonder how she came by her name? And if you'd guessed she was named after the song, believe it or not, you would be right! I fist heard Kayleigh by Marillion when I was 15 years old, and immediately decided that if I ever had a daughter, she would be called Kayleigh. It was, and still is, the most beautiful name I'd ever heard. As luck would have it, her dad turned out to be a big Marillion fan, so there was no battle over a name.

We saved the battles for our second child...

Meet Sean as a baby. And rather than the centre of my life shifting from one to another, it simply expanded to accommodate this adorable young man: 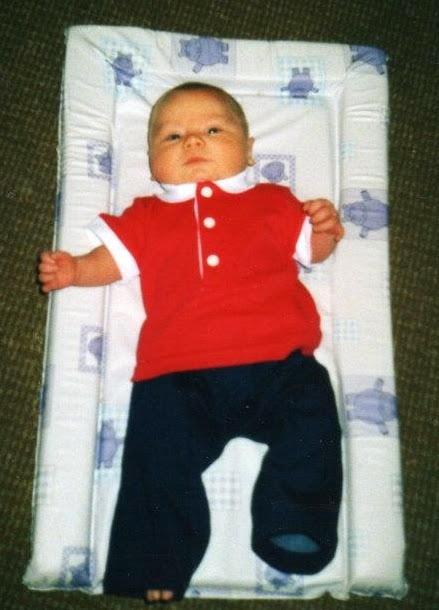 Now, had Sean been a girl, the name would again have been a simple matter. He would have been Caitlin. But as my due day grew near, we still hadn't settled on even a short list for boys names... I had my heart set on Kieran, but hubby was having none of it, and even though we'd had almost nine months to figure it out, we got to a couple of days before the birth with nada! Every time one of us came up with a name, the other would veto, and vice versa.

Then we happened to be watching The Fellowship of the Ring one evening, and hubby joked "What about Frodo?"
I recall throwing something at him, and telling him all LOTR names were out of the question. (I had a friend in high school who had the misfortune to be called Gandalf. He got teased mercilessly back then, I can only imagine how much more difficult his life became after the films came out!).
I then thought for a moment and added "And cast names are also out... Orlando? Viggo? I think not!"

But then hubby said "What about Sean?"

Well, he had me there. I freely admit to having a weakness for Irish names (and Sean Bean! lol), and it immediately went on the list. We ended up adding a few more names over the next couple of days, but as soon as I held him for the first time, hubby and I looked at each other and said "Sean" at the same time. sometimes names just fit.

So, that's my little story (hope you kept your eyes peeled for the "magic" words!), and now finally, I can share my card! 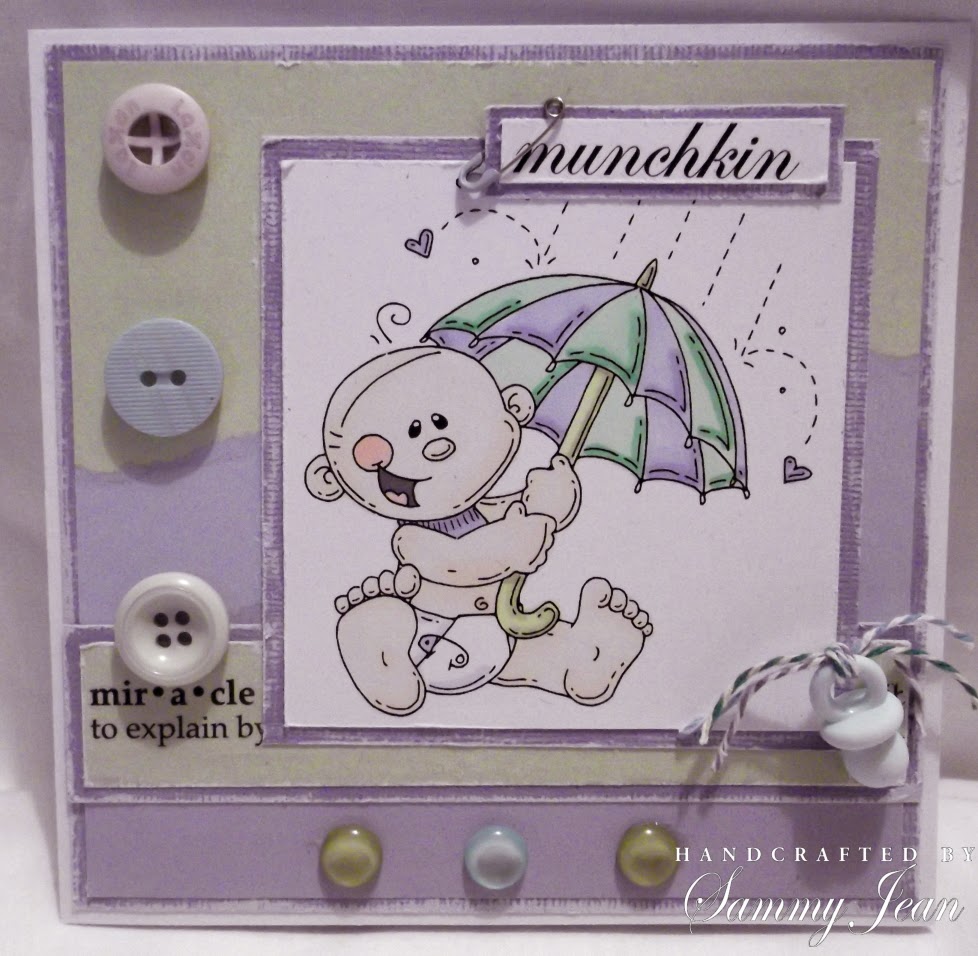 I dug around in my stash for some baby-related goodies, and decided to not go with traditional blues or pinks, but instead with a more gender-neutral colour scheme.

So, that's it from me for today. If you managed to make it through to the end, I think you deserve a medal! However, I don't have any of those, but if you leave me a comment below, you will be in the running to win a little surprise something. And don't forget to visit the rest of the dragonflies too, as there's plenty of other chances to win, and stories and lovely makes to see!

Have a fantastic day!

I am not in the running but I did enjoy the stories and the pictures of you (not so) little ones. Hmm! Green in the card is for the little Irish name and the purple is for...hmmm...????? I'll think about that but I would say Kayleigh almost sounds royal. LOL. Cute card Sammy.

Royal prince and princess - so cute both of them! Love the story and the way you wove the clue in there girl! Wish I was eligible!

Awwww Sammy! They grow tooooo quick don't they?! :( Wish we could go back in time to the day they were born and do it all over again! Your babies are soooooo PRECIOUS & BEAUTIFUL and thank you for sharing your memories with us! I giggled about the one about "Frodo" .. ahahahahah! Leave it to men to say something like that! ;) lol!!!!

Well, your card is simply BEAUUUUTIFUL! Love the very soft barely there colors .. perfect for babies especially! And love the buttons up the side too!

Awwww thank you for sharing your very special baby photos and for telling us how you chose your names.
Your card is gorgeous, adorable image and beautiful detailing.
Sue xx

A great card as well.

Gorgeous card, love the image. I love your photo's and I agree they grow so quickly. I look at my daughter who will be 30 next year and wonder where the time as flown to! Gail

Lovely pics Sammy...where do the years go!? Love the colours you chose for your card too! xx

Sammy..I loved the fact that you made a gender-neutral color scheme. Babies are god's gift irrespective of the fact that they it is a girl or a boy.

The pictures are 'oh so cute'. They take me back to my childhood. And yes!! naming the child is the most difficult yet fun part(with suggestions pouring in from all over the world from friends and relatives..Lol)

Thanks for the chance to win!!

We struggled with our second baby name as well, he was a boy after a girl, and guess what, he got an Irish name- Ryan! Your story made me smile as it was so close to ours. Love the colours of your cute card, hugs, Judith xx

Love the pics of your babies, and the wonderful story to go with it..well done, great card and clues, blessings Hilde

Great story Sammy. Don't these babies grow up too quickly. If I could go back in time that's the time I'd choose when my babies arrived. I love you card and how you managed to match up the colours of the buttons and the card candy .....great job!! Hugs Wynn x

Lovely baby pics of your kids.
I love the image and the buttons on your card. So cute!!!

Your bambinos are just adorable and precious and your card just gorgeous.
Hugs Desíre {Doing Life}

Lovely piccies and stories and a really adorable card to go with them. You have two beautiful children and I hope they will always bring you much happiness. Hugs xx

Love the stories about your 'babies' and the card

You achieved what you aimed for - a card that is equally perfect for a baby boy as for a girl, and this soft purple color scheme sure works well for a card for a little one! So sweet!

It's so nice of everyone to be sharing their personal baby stories and photos. I even went and listened to your song. Kahleigh is a lovely name. I kind of like Frodo. LOL Your card is beautiful in the soft colors you used. TFS
DebiB
thatmightlookgoodonacard.blogspot.com

I loved your stories and the adorable pictures.
Your card is so cute.
Thanks for sharing.
Crafty hugs,
D~
DesignsByDragonfly.blogspot
{Sorry Google Friend won't let me follow anyone. ugh}

Great colors Sammy, love the non-traditional look of them but still very pretty. My oldest daughter is also a Kaylee (but I haven't heard the song, will have to go check it out) and if we'd have had a boy next he would have been named Shawn. We hadn't quite settled on a spelling but our second was a girl also and we had a heck of a time picking a second girls name, lol. So many similarities in our stories, too cool,
{Hugs} Barb