Inspired by a book, song or film - Sweet Stampin' DT

It's Saturday, which of course means a new challenge over at Sweet Stampin' and this week Team Fi get to play with the super fun theme of Inspired by a book, song or film.

For me the choice was an easy one... I recently won some images from Sassy Studios, and one of the ones I chose was the perfect digi for a birthday card for a friend of mine, whose birthday is next week!

This is what I made for him, and I'd say my inspiration should be rather obvious! 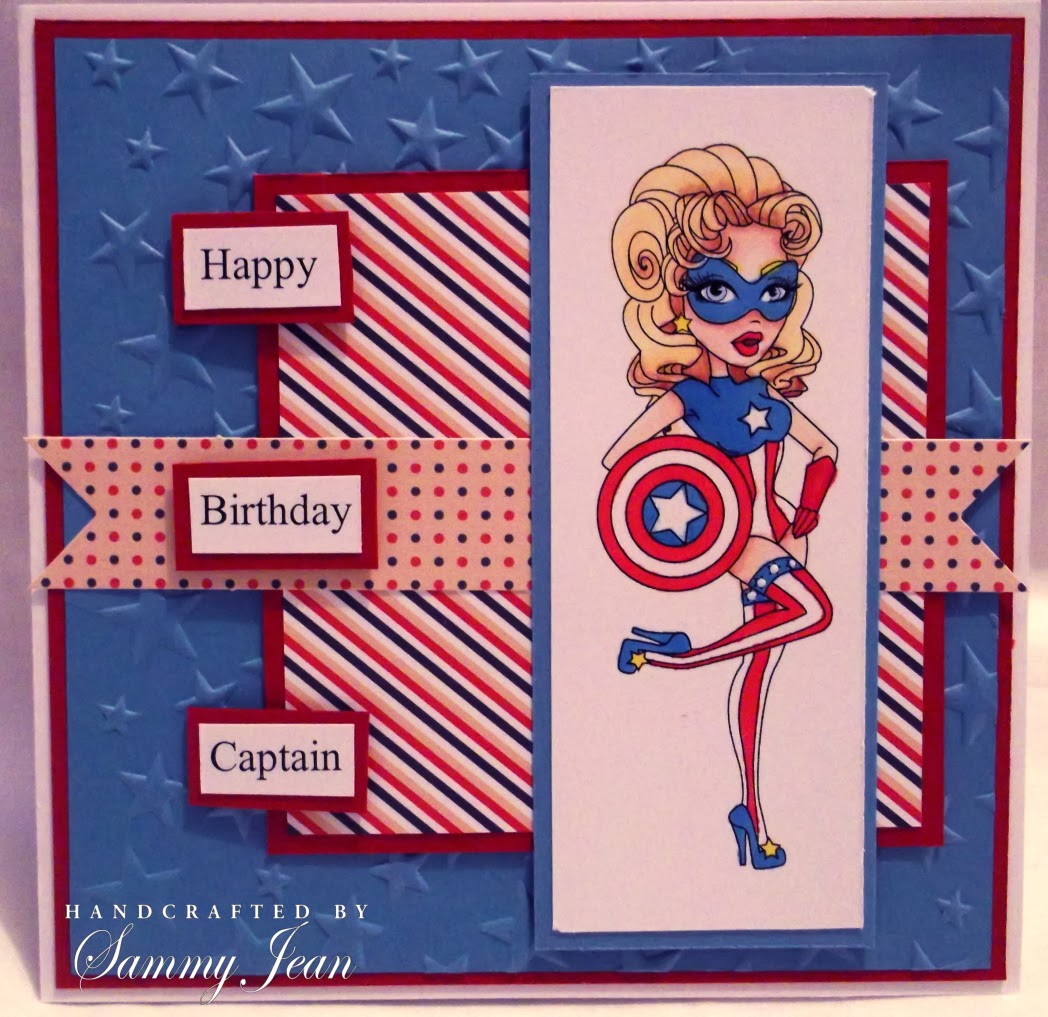 Of course it's the film "Captain America", which my friend is a huge fan of. Being a typical red-blooded male, females in figure-hugging costumes and stockings are also much appreciated, so I completely expect this card to be well received!

The papers are from Craftwork Cards and I did some more embossing as a way to include stars. (I put off trying embossing for ages, then half my cards suddenly use the technique!)

The sentiment was computer generated. Fun fact, the gentleman in question is actually known to myself and others in our circle as "colonel" (In fact, I think in all the years that I've known him, I've never actually called him by his actual name! He's always "colonel" or "sir"...)
I'm sure that he won't mind being demoted to "Captain" temporarily, lol.

So there you go, one card inspired by a film. There's some brilliant cards by my fellow sweeties waiting to be admired over on the Sweet Stampin' blog, so I suggest you go take a peek and see if you can guess what's inspired by what!

I'm soooo looking forward to seeing the entries this week!


Have a most fantabulous weekend!

Have a good weekend.

What a show-stopper, Sammy! The red, white and blue is so striking! I'm sure the 'Colonel' will love it! Have a great weekend. xx

Fabulous card Sammy. I love the fun image and wonderful colours.
I hope you are having a good weekend.
Sue xx

What a GREAT FUN image and so BEAUTIFULLY done!!! Perfect for your theme!!!

This is gorgeous Sammy, I like the image the embossing and the papers.
Kevin xx

Simply gorgeous Sammy! Love the colors and your layout!!! And the embossed stars add such a STUNNING touch!

Love this card, so funky and great way to use those papers, Sammy!

How fun is this, Sammy!! No, no, I don't think he will mind being Captain, especially if he's Captain America!! Hugs, Darnell

This is a brilliant card Sammy, fabulous image and great design - it sounds like it is perfect for your friend.
Pauline
x

Great card , Thanks for joining in with us this week at Graph'It colour challenge
Good Luck Susan xx

What a fab card Sammy, love the colours and your design..Hugs Lozzy xx

A really fun eye-catching card and I'm sure it will go down a storm with your friend :-)
Hugs, Kat x

Wow what a fab card, love that image and the colours are so vibrant! Thanks for joining us at Graph'it Colouring Challenge this time
Claire xx

Beautiful colouring, and you've matched the papers perfectly. Awesome card! Thank you for sharing your lovely creation with us at paper Crafting Journey.
Joyce xx

A super image and a fun card Sammy. I am sure your friend will love it.
Mags
x