New challenge time over at Sweet Stampin', and this time it's a two week challenge as the DT get a little time off during December. The theme this week is Anything Christmas/last minute cards.

Now I've only just started on my cards for this year (!), so quick and easy is definitely the way to go. So I decided on a design, and started churning them out over the past couple of weeks. 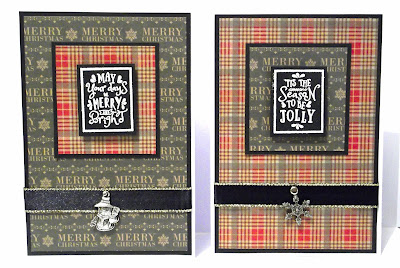 I've made about 20 pairs of cards this way (and have gone through a terrifying amount of black card and double-sided tape!), which has at least helped me make a little dent in the ridiculous amount of Christmas charms I own...

The stamp set used is a really fab set of mini stamps from LotV, which are just perfect for doing a blackboard technique with. I just stamped a whole load of them onto a sheet of card with embossing ink, added white embossing powder and embossed them all in one go. Super quick to do it that way, though you do have to work quickly before the ink dries!
I then cut the card and paper, and stuck everything down in batches of two. It'll work with most papers, but I find the traditional red and greens look best.

Of course, after making so many of these, I don't ever want to make another again! lol.

Now it's over to you guys. You know you've forgotten a card or two (or like me, have barely even started), so this is a perfect time for you to have a play and join us for the challenge.

Have a fantabulous day,

Eek! It's December (and I've not even started my Christmas cards yet!) and therefore time for an extra long two-month challenge over at Rhedd's Creative Spirit, as the DT gets some time off for good behaviour over Christmas.

This month I took a lovely mirrored half-birdcage, and made it a little more festive. I purposefully stayed away from anything too overtly Christmassy, so it can be used as a year-round decoration too. 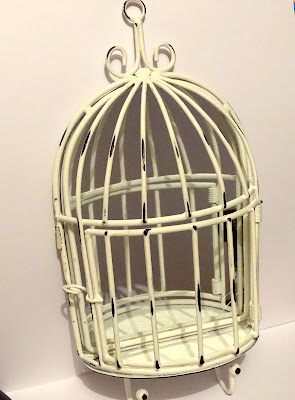 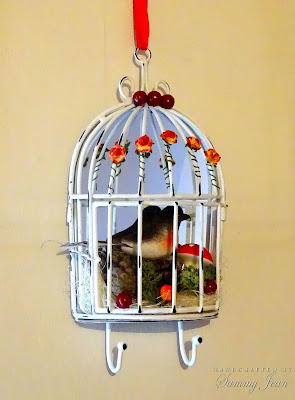 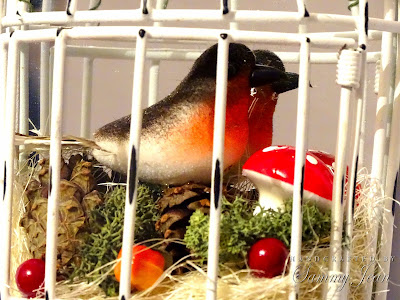 Tell you what though... with the mirrored back it was nigh impossible to photograph. I ended up having to use hubby and some sheets of white card to stop reflections from confusing the picture.

And now it's over to you guys. Come and play with us, we'd love to see what you make!

December already, and it's dreary and miserable out. Which is why I decided my DT inspiration for Altered Eclectics this month should be bright and colourful!

I recently did a fantastic workshop organised by Art Workshops with the fabulous Marlene Meijer-van Niekerk. While the second day was pretty much my usual fare - a selection of tags - the first day pretty much had me quaking in my boots. The workshop was called Funky Faces, and we were required to draw!

Anyone who knows me is well aware that I don't, can't, draw. I don't draw, doodle or otherwise create an image from nothing without stamps and ink!

Imagine my horror when we were handed a huge board to work on and were told we were doing just that!

But after a few false starts, I managed to get the basics down, and after that it was playing with colours (and Marlene's gorgeous papers!), colours and more colours.

And this was the result: 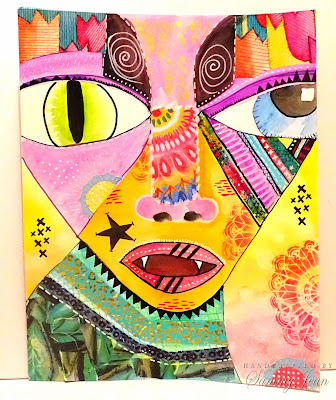 And just so you get an idea of the terrifying scale, this is the same picture with a standard Promarker lying in front... 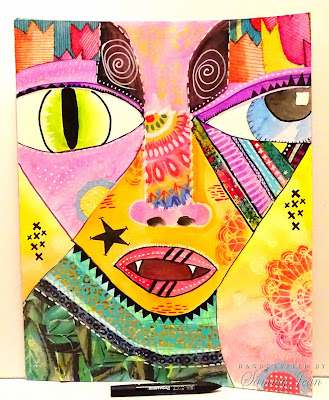 Considering I never believed I'd even  get past the first step, I am so very pleased I managed to actually complete this! And it is quite possibly the most colourful thing I've ever made!

Right then, it's over to you. Let us see your fabulous makes (colourful or otherwise). You have two months to play along this time, as we take some time off over Christmas.