Are you ready for a new challenge? How about a cute and cuddly one? I hope so, because that's the theme over at Sweet Stampin' this week, and we'd really like to see you play along!

Now, for me, Cute and Cuddly tends to equate to bears. Other animals/people can be cute and cuddly too, but bears remind me of my baby bear (obviously), who just happens to be the cuddliest boy in the world! 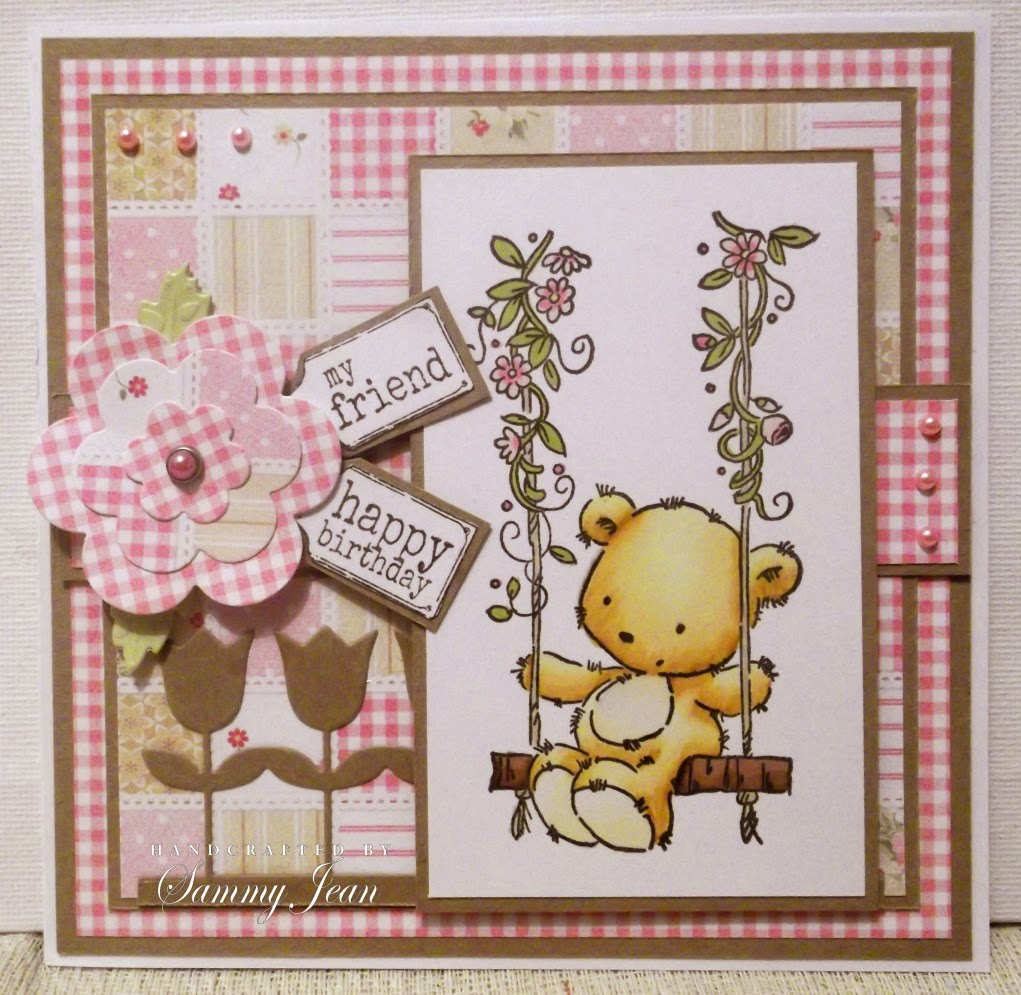 I used an adorable bear stamp from LOTV, and the papers and sentiments are theirs also.
I used a memory box tulip border die, and some Sue Wilson flower dies.
I matted everything with kraft card, which I personally think goes so well with those papers!
And of course the image was coloured with my Promarkers. Oh, and there's a Hobby House brad holding the flowers together. And some pearls...

Well, I think I managed cute and cuddly, no? I know for a fact most of you are seasoned "cute and cuddly" crafters, so you have no excuse not to join in, for those of you that don't do cute, this is a perfect opportunity to expand your horizons ;-)

I would really like to enter this card into the following challenges:

Have a fantabulous weekend everyone!

I don't know if you're aware, but the January challenge over at The Crafting Cafe is Lots of Layers. I don't know about you, but I love that theme, probably because it goes well with my paper obsession! lol.

Now, we got a selection of lovely images from our sponsor Bugaboo, and I couldn't choose which to use... So I made two!

First of all, I made a card for a young girl, complete with Glossy Accents balloon and LOTS of liquid pearls! 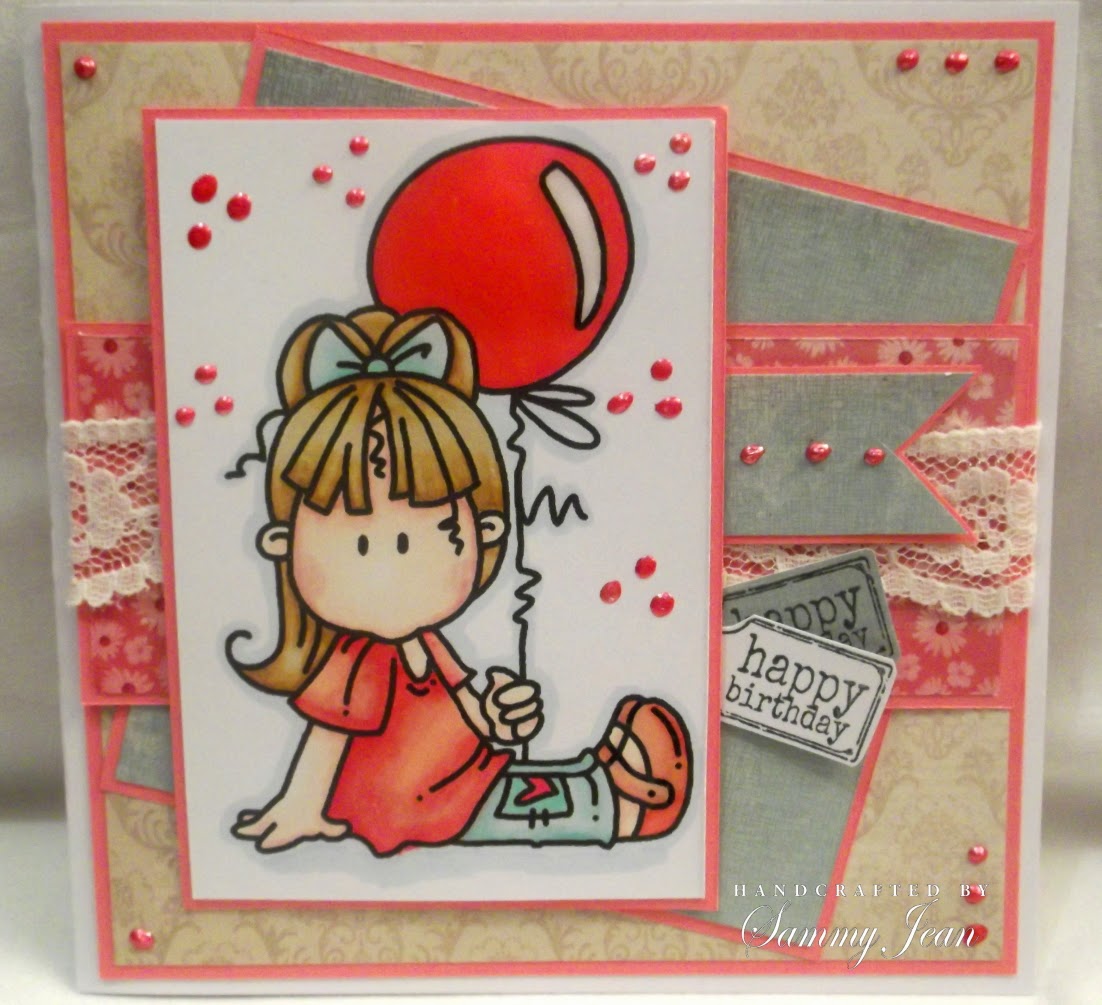 And then I did one for a grown-up girl. I'm not sure why, but I seem to really like shopping images at the moment, even though I detest shopping myself (except for crafty goodies, naturally). 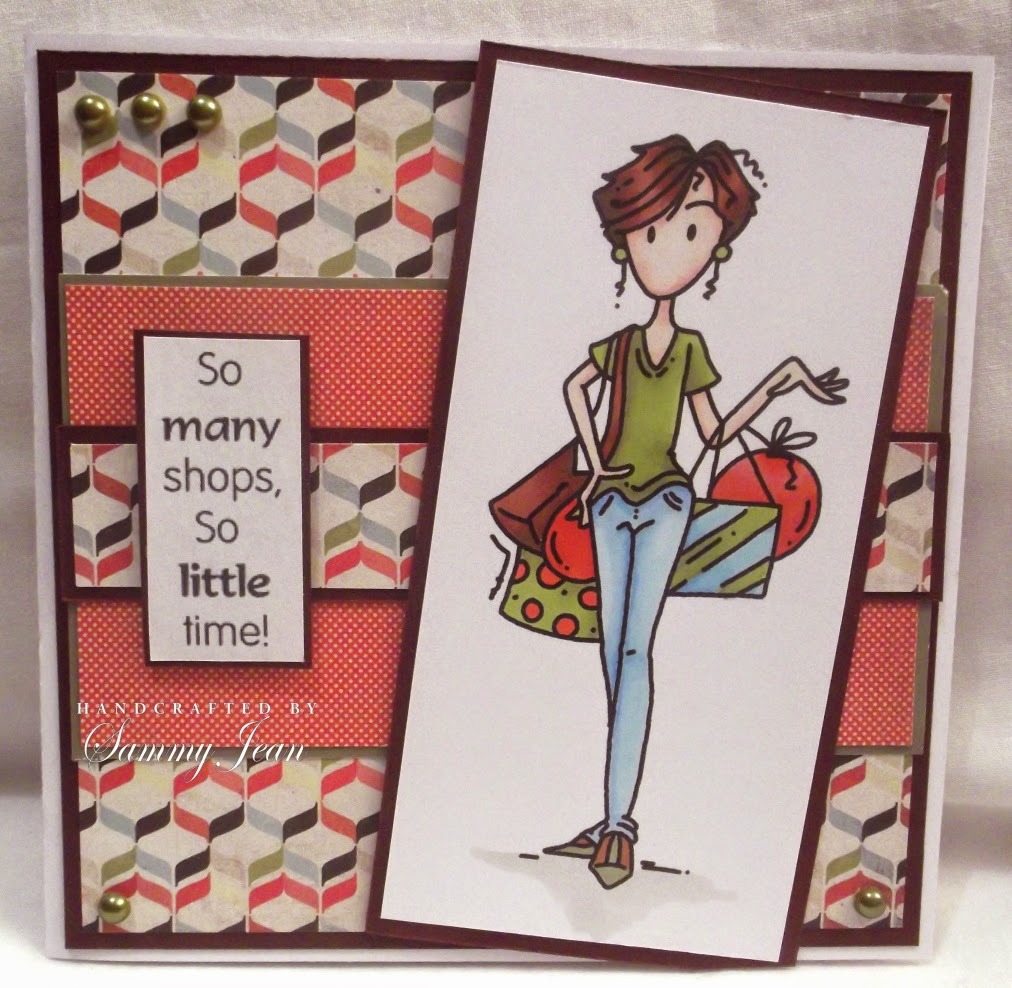 I love these papers (from the Basic Grey "Hipster" pad), but don't often make a card with an image that suits them. I think this one does :-) I also kept the embellishments to a minimum, just a few pearls. And the sentiment was something I cobbled together in word!

Now then, your turn. There's still a week to enter, so get layering and join us!

Have a fabulous day!

I'm sure you are all familiar with Darnell, over at djkardkreations? Well, for those of you who aren't, she is one of my favourite bloggers, who makes such beautiful cards and has a wonderful way with words. And acronyms too. Which brings me to NBUS. NBUS stands for "never-before-used-schtuff", something I'm sure we all have an abundance of. In an effort to help us reduce the amount os NBUS we all have in our collections, Darnell is currently hosting her 3rd NBUS challenge.
The idea is to make a card using NBUS of some description, and then linking it to the challenge.

Naturally, I had to play along, especially as I had a whole bag full of new Sir Tim goodies to play with!

I really enjoyed the blackboard technique I tried out recently, so I decided to do another, and this was the result: 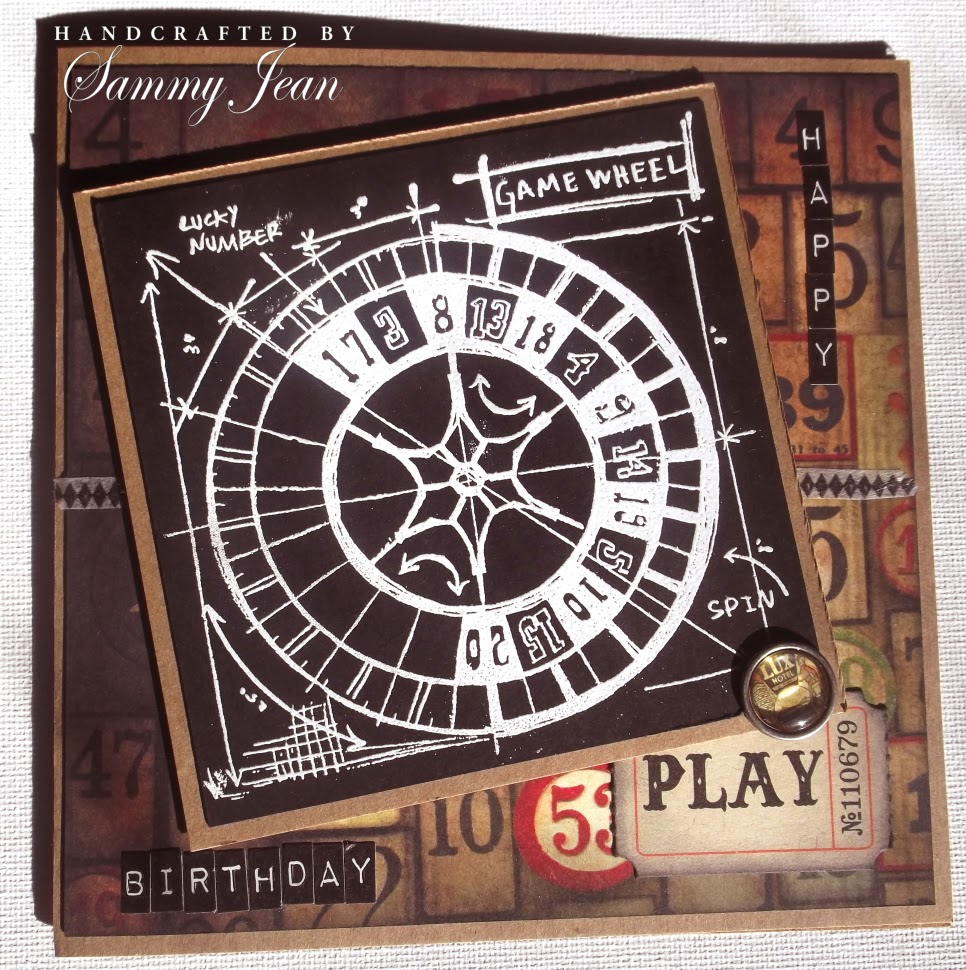 The stamp, brad, tissue tape and "play" ticket, are all NBUS. Sorry, were, as I obviously used them here! ;-)

In other news, don't forget about the DT call over at Buckwells Crafty Challenge. We're looking for a few extra teamies, so if you fancy playing along, please do apply!

Have an awesomesauce day!

'Tis Saturday, and you all know by now Saturday is new challenge day over at Sweet Stampin'. And this week, the challenge is Girly but no pink. (Sorry Christine! lol)

I dug out a girly stamp, and browsed through my papers for inspiration... I seemed to be drawn to green and yellow, so chose some of those, and offset it all with kraft card mats. 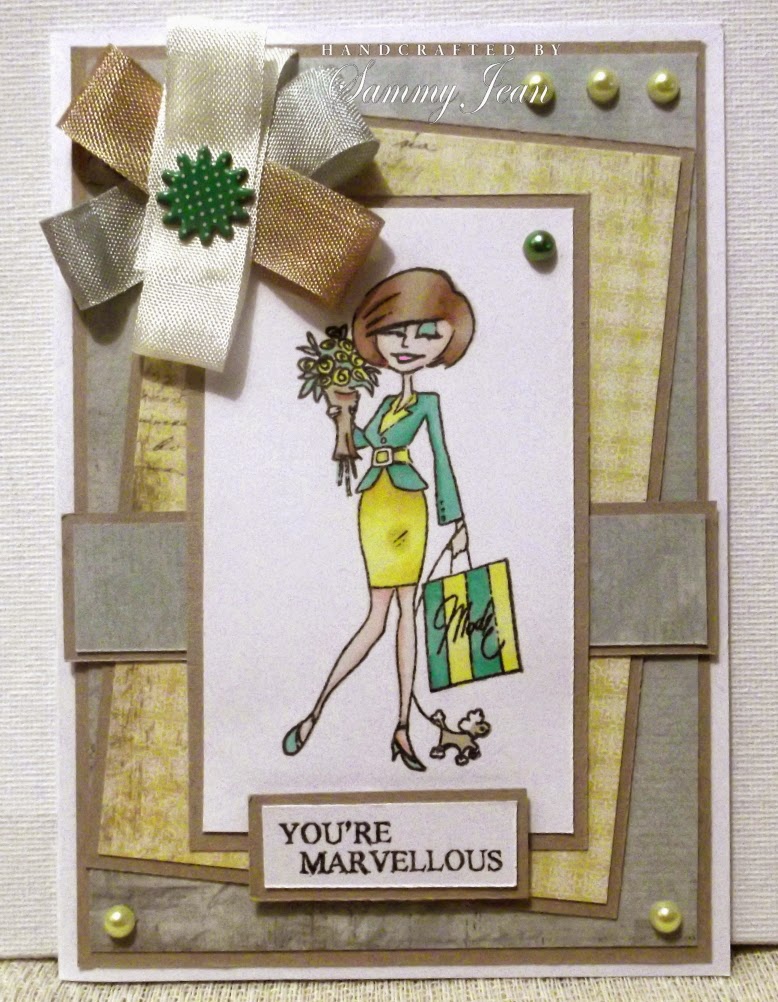 I made a flower with complementary seam binding (from the Ribbon Girl), and finished off with a LOTV sentiment and some pearls and a brad.
The card is A6 size too... been AAAAAAGES since I made one of those. My default seems to be 14x14cm these days (perfect size for a sheet of A4, lol)

So that's my contribution. hope you guys will come and play along too!

Just thought I'd let you all know there's a DT call happening over at Buckwells Crafty Challenge.

This is the info:

We are looking for 4/6 ladies/gents to join our Design Team.

Are you a dedicated crafter who:
If you answer "yes" to the above please add your name and your blog to the link below.

The Design Team call will run until the 30th January

Any questions just send them to ninspapercrafting@gmail.com

Fancy coming to play with us? Of course you do. There's a linky over on the challenge blog for you to pop your name down!

Hope you're having a most excellent weekend!

Naturally the first of the month also means a new challenge at Rhedd's Creative Spirit, so I'm back again this morning with a new project. As always Anything Altered Art Goes, and we have a brand new team waiting to wow you with their creations!

I decided to alter an A-5 ring binder to store dies in. I took the mixed media route, and though I'm only posting this now, I actually made it before the butterfly canvas, making this my first attempt at this kind of painty, inky, papery, mixed media goodness. 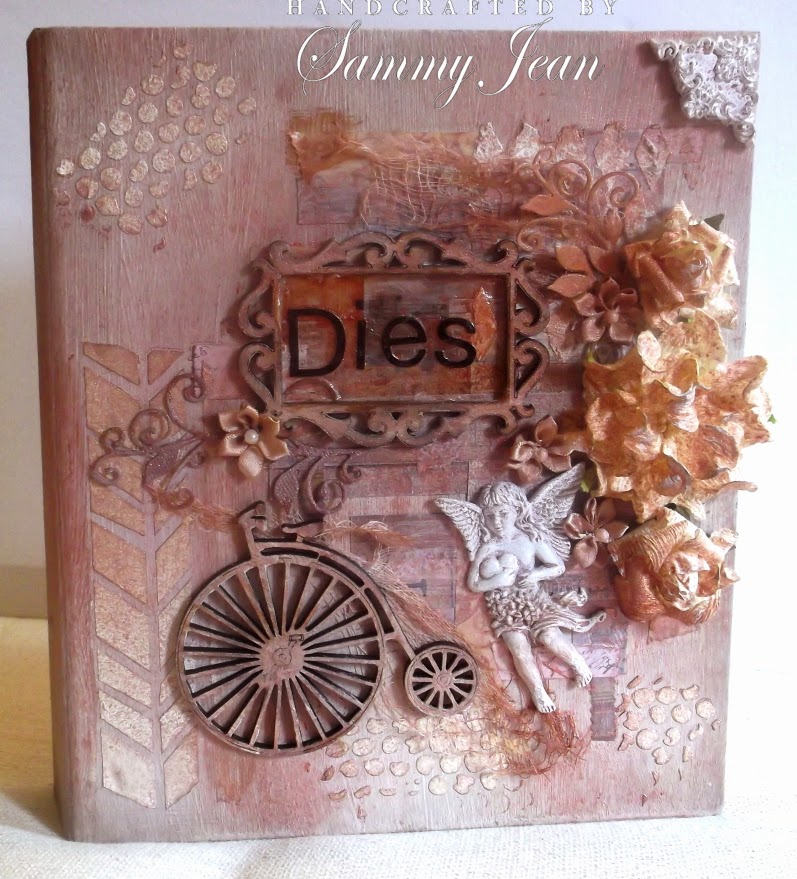 I started with a base coat of white paint, and then layered strips of paper over part of it. (Tim Holtz papers, though they're unrecognisable now, lol). I interspersed it with some washi tape and then went to town with my stencils and some home-made texture paste. I added some die-cuts, some wooden shapes from Fernli, a Prima angel and corner and some flowers too. I also added cheesecloth, which I'd roughly pre-coloured.
I also used several sprays and glimmer mists and the whole thing shimmers beautifully, though you'll just have to take my word for that, lol. 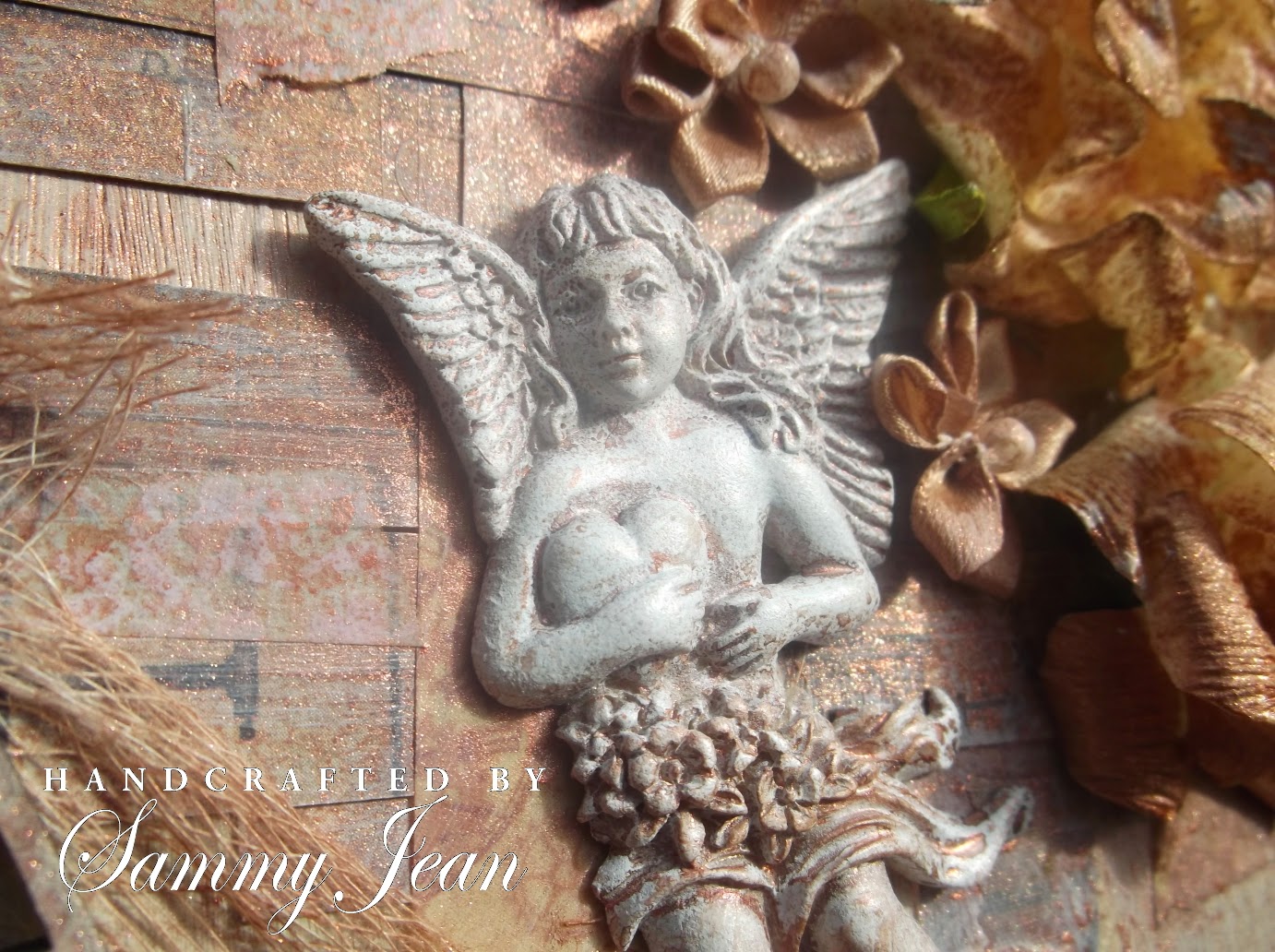 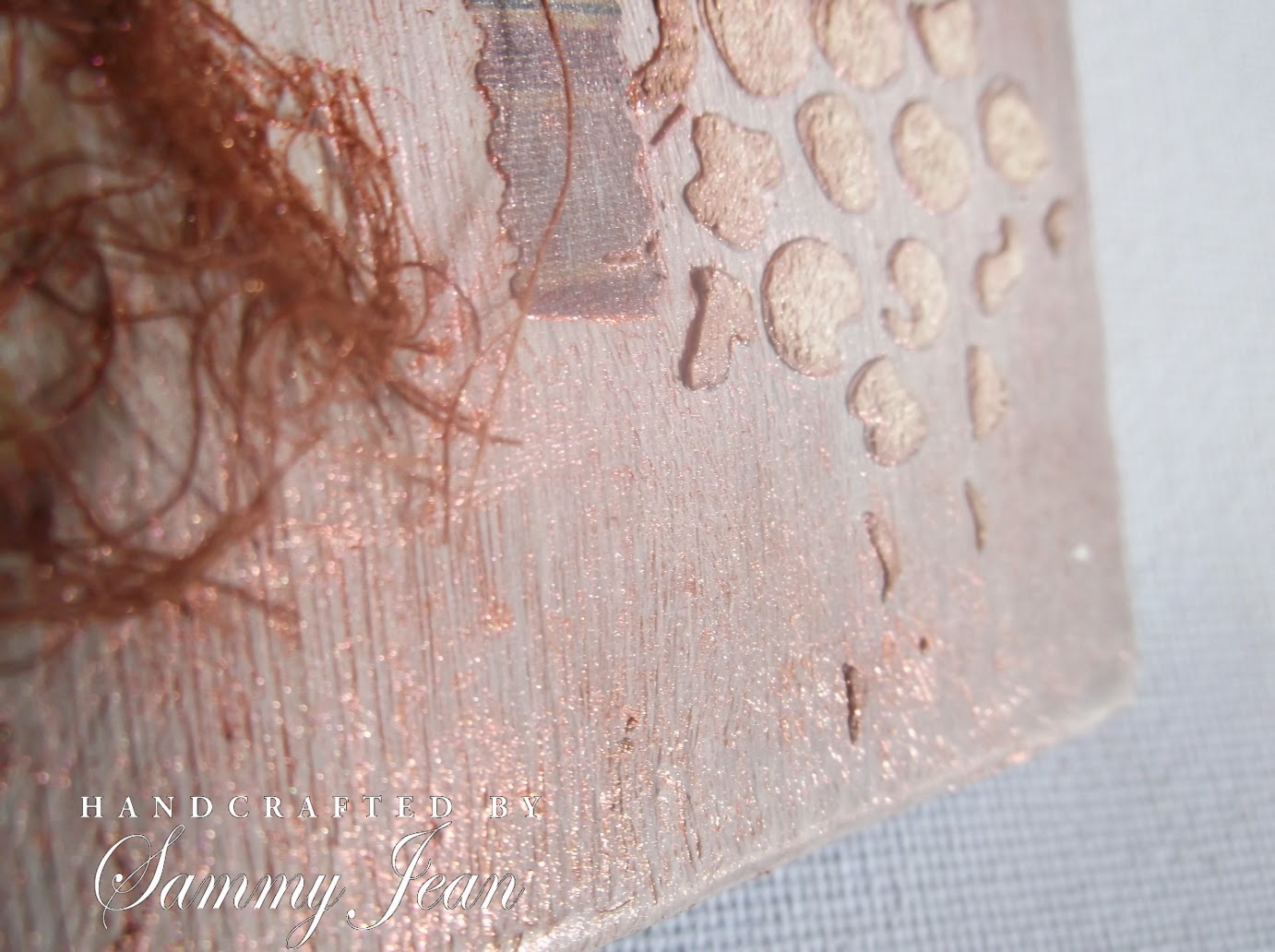 An angled shot to try and capture some of the sparkle... 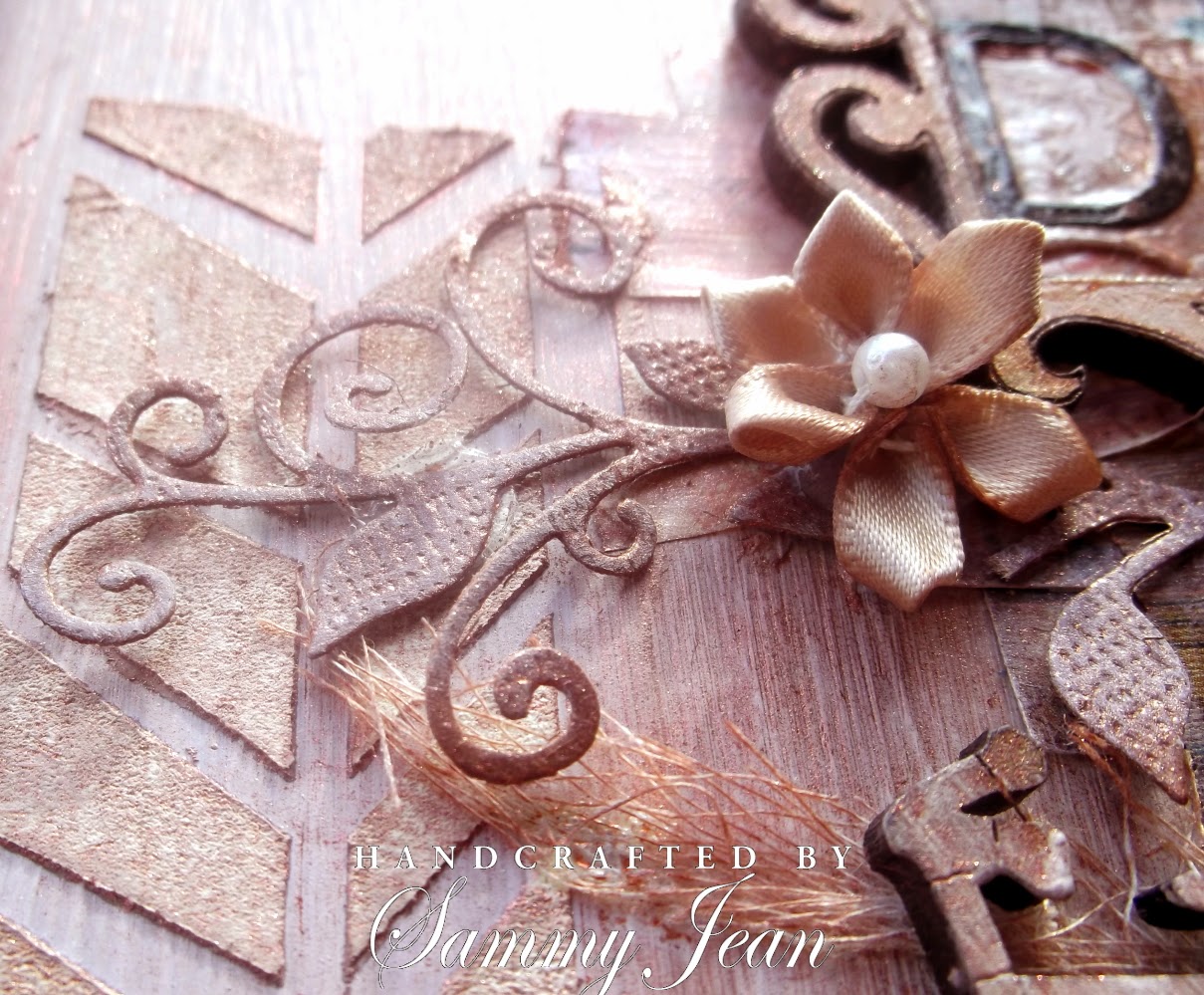 I die-cut the swirls from textured cardstock, which added an extra bit of texture to the overall look. 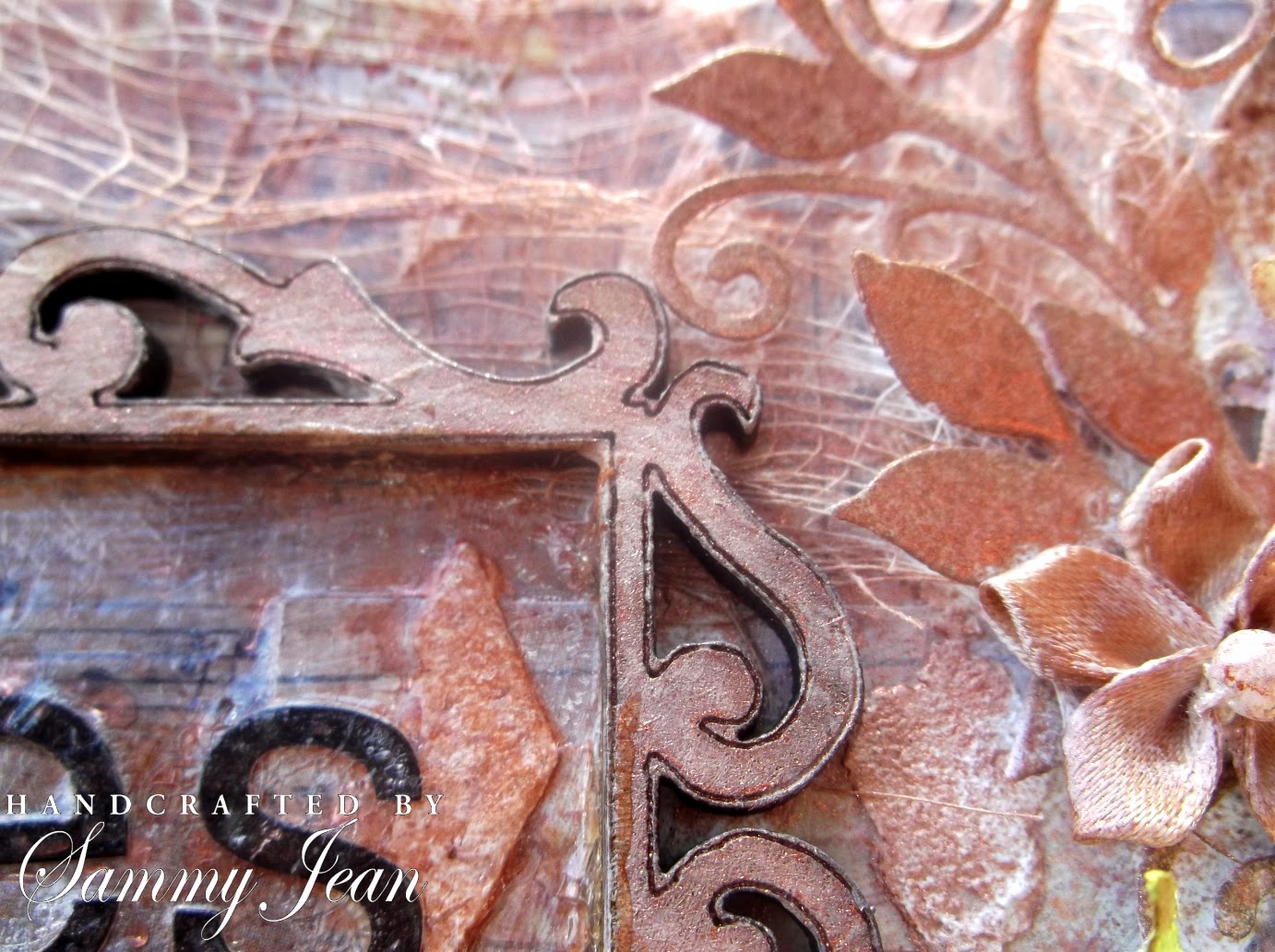 I also added crackle paint to the area inside the frame, after spelling out "dies" with black stick-on letters.

So there it is, and this binder now houses my nesting dies (on magnetic sheets...).
Now I hope you'll go take a peek at what the new team has created for you all, and if you fancy dabbling with some altered art too (I know you do, you all keep telling me so! lol), then why not come and show it off?

Good morning all, and Happy New Year! May it be a fun and creative one, and may you all find yourselves in the best possible health and happiness.

First up it's the new challenge over at Buckwell's Crafty Challenge, and the theme is an easy peasy Anything Goes, so I expect you all to come play along! ;-)

I used an image from our sponsor A Lil Digi Heaven and made a tag: 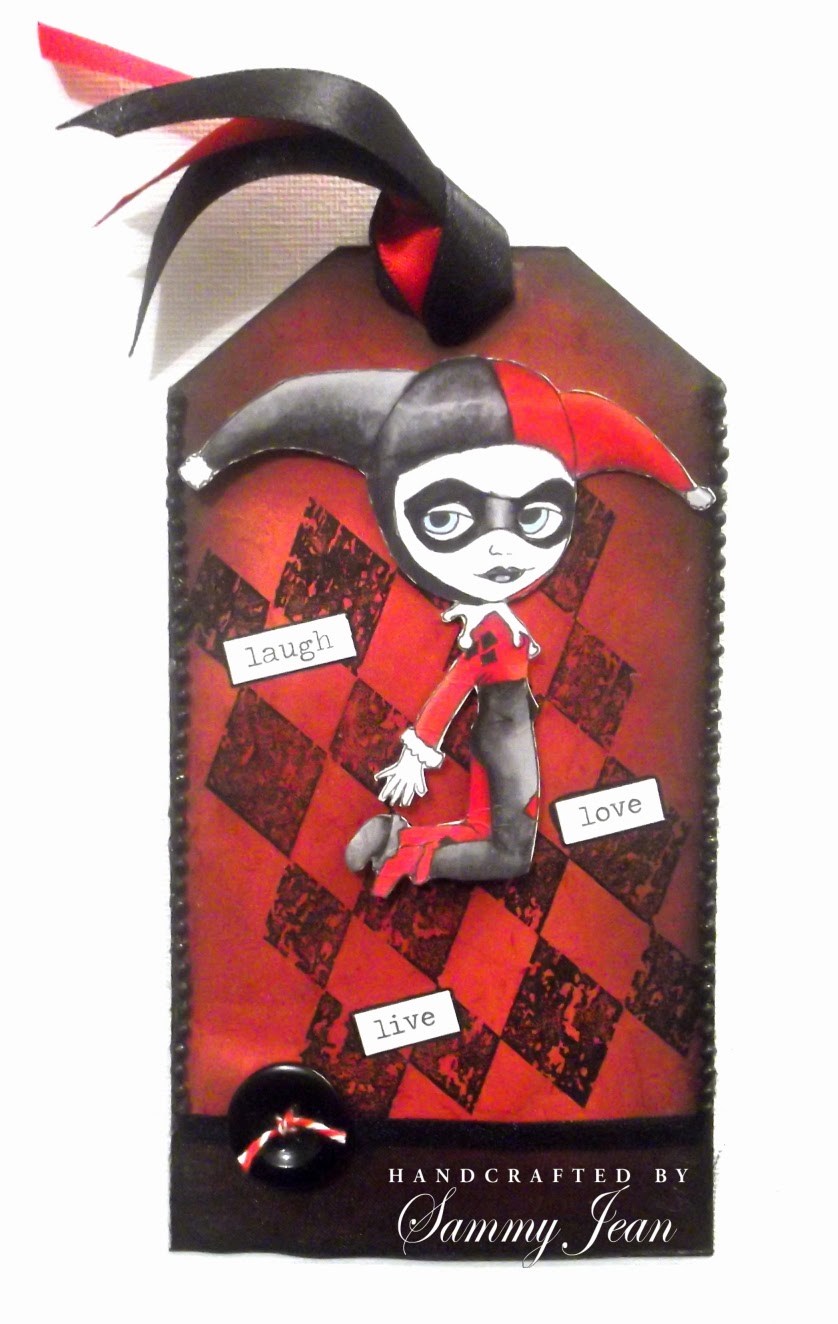 I'm sending this to someone in America I'm doing an "art exchange" with. She loves geeky stuff (including the Batman universe, so I'm hoping Harley will be appreciated :-)

The background stamp is from Visible Image, and I used red and black ribbon from Buckwell's Craft Supplies. The words are Tim Holtz chit chat stickers and the rest are bits and pieces from my stash.

Now then you lot, time to get your craft on and come share your creations with us!

Have a splendiferous day!
Sammy-x
Posted by Sammy at 08:00 6 comments: