I should be arriving home from my hols soon, and am looking forward to catching up with you all.
But in the meantime, it's new challenge time at Sweet Stampin', and it's time again for Father's Day or Special male cards!

The card I made for my daddy this year reflects his fondness for cycling (he's just started training for a big race again after many years off the saddle!), and I gave it a vintage twist, because I always tease him about being old, just as my kids do with hubby, lol. 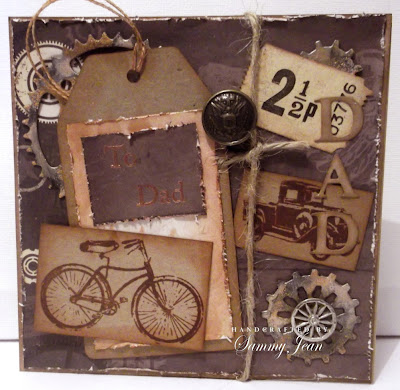 And as I used a kraft base, I felt I ought to add something to the inside too, so that's what I did. 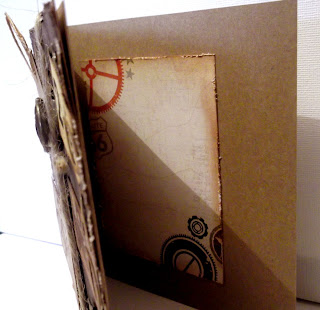 Sorry about the awkward angle. My camera and I are still not quite on speaking terms, lol.

Don't forget to go see what my fellow Sweeties have been up to, and I'll "see" you all soon.

Have a great one!

Around the world - The Crafting Cafe DT

If all goes according to plan, I shall be soaking up the sun rain as you're reading this, as we'll be away on our hols. Weather forecast is miserable, so this could be fun, lol.

What is much more fun, is the current challenge at The Crafting Cafe, which this month has the theme of Around the World. As our holiday didn't involve leaving the country, I figured I'd use this fab image from our sponsor Bugaboo, and make a card for my brother. 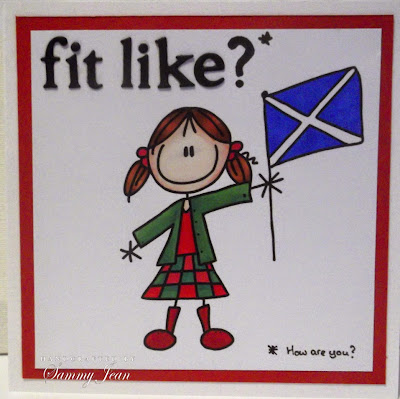 The sentiment is in Doric, a dialect spoken in North-East Scotland, and means "How are you?" (which I added to the bottom of the card, as you can see.) It's a bit of an in-joke, as my brother is becoming more and more intelligible every time we see him. I'm sure he's making half of it up! ;-)

There's still a week to enter this month, so I hope you'll come and play along!

Have a great week!

Well, there's a scary (for me anyway) theme this week at Sweet Stampin... We're looking for your CAS creations.

I took the opportunity to make a birthday card which had been requested, and used a fab Annabel image from LOTV, and very little else! 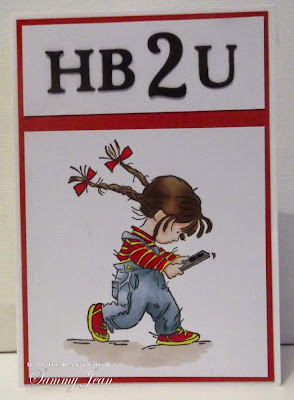 (apologies for the photo. My camera had a hissy fit and reset itself to its default settings and try as I might I can't seem to get it to behave. Hence the dark and slightly out-of-focus photo. The wonkiness however is all me!)

Now the sentiment happens to include two of my pet hates (2 and U instead of to and you), but it was requested as such, and it does go with the image.

I know for a fact there are many, many of you that are CAS experts, so I hope you'll come and play along with us this week

Have an awesomesauce weekend!

Popping in this morning with my mid-month inspiration for Buckwell's Crafty Challenge, featuring our regular sponsor, A Lil Digi Heaven.

For this card I chose the fab image called Serenity. Now if any of you are familiar with the TV show Firefly, or the later film Serenity, you will certainly recognise those influences in this image.
Which made it the perfect image to use on a card for my brother, who like me is a big fan! (In fact, any of you that were around when I first started my blog may well remember an earlier card I made for him with the same theme!)

I went predominantly with brown and creamy yellow colours, which also fit in with the show. 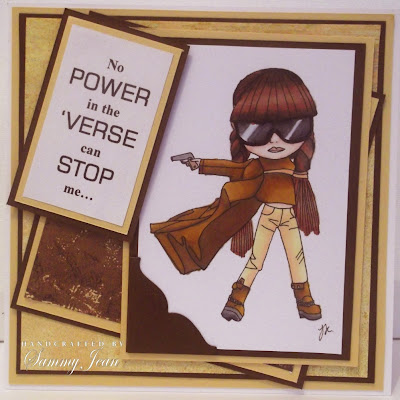 The sentiment if a quote from the show, and I followed it up on the inside with "From wishing you a shiny birthday".

And there she is. Ready to get sent off to Edinburgh in August (nothing like being ahead, lol).

And don't forget this month's spots and/or stripes challenge.

Have a fantastic day!

LOVE the tinted photo technique this month, but I decided to go the Abandoned Coral route, rather than the green. I also grabsied myself a pack of the photobooth images when I was at Art From the Heart the other week, as I'd fallen in love with them as soon as I saw them displayed on Tim's blog. Of course I may have picked up one or two other items while I was there... *cough*

I was quite pleased actually to find that a lot of the stuff on my tag this month is TH. Obviously my shopping trips are paying off, lol. The burlap is from my stash (I bought a metre of it a year or two ago, because I use so much of it!) and I finally found a use for some thick card stickers that have been sitting in a box not getting used for the past couple of years!

Hope everyone is well. I've finally got my PC sort-of sorted now (after a nightmare of a time on Wednesday trying to get it to co-operate), just need to start setting everything up again and install vital programmes, etc.
I shall prevail! Hehe...

Have an awesomesauce day, and a fantabulous weekend!

Inspired by a book or film - Sweet Stampin' DT

If all has gone according to plan, by the time you all read this I will have already been in town - freezing my bottom off - for a couple of hours, escorting my dearest daughter and her friend to a comic book event.
Oh the joys of being a parent!

At least I won't be in the snow (I hope!), unlike poor James, as you will see in a moment. You see, it's time for a inspired by a book or film challenge over at Sweet Stampin', and I decided to ink up this adorable LOTV stamp.

The film I used for inspiration was one which, although well acted and well-represented in the eye candy department by the scrummy John Schneider, was rather lacking in terms of story cohesion and... well... logic. lol. The title is "Snow Beast". Feel free to look it up, but I would suggest it's for die-hard fans only!

So, without further ado, my Snow Beast, which is rather cuter and cuddlier than the one in the film! 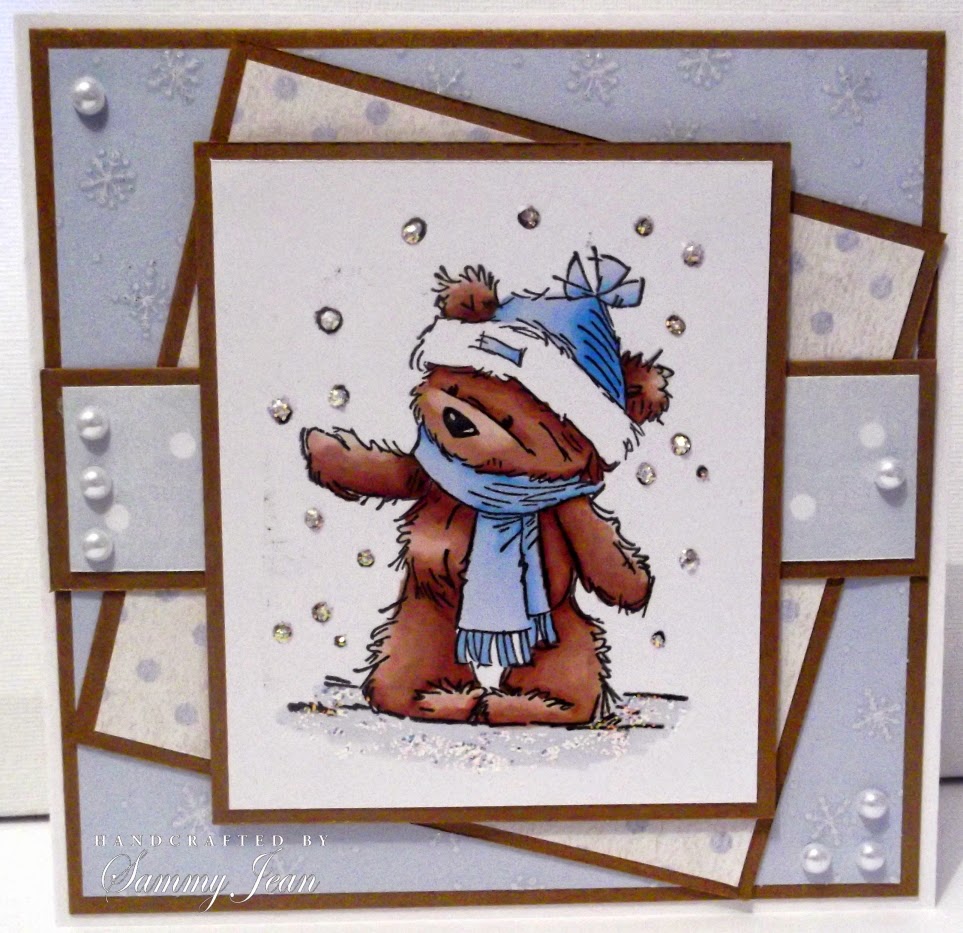 The papers are a mixture of LOTV and Dovecraft.

I always love to see what books or films inspire other people to create, so please do come and share with us this week!

Hope you all enjoy your (bank holiday if you're in the UK) weekend, and if I don't see you before, Happy Star Wars Day for Monday!

May the fourth be with you!

And I have my second nautical project of the day for you, for the May challenge over at Rhedd's Creative Spirit. You know the drill by now, anything altered art goes, no cards, etc.

Now, as I mentioned earlier, we'll be off to the seaside for a family holiday in a few weeks, which we are sooooo looking forward to. But back in February, we spent a day there, getting a "sneak preview" of what's in store when my parents decided on a holiday in the same place.
While we were there, we took a stroll along the beach and found some lovely seashells, including a gorgeous whelk that my daughter found (at around 10cm tall. It's brilliant!).

I also happened to have a few photo frames waiting to be given some TLC, so I chose a lovely chunky one, and set to work with my paints and stencils and other messy stuff and combined with the shells it resulted in this: 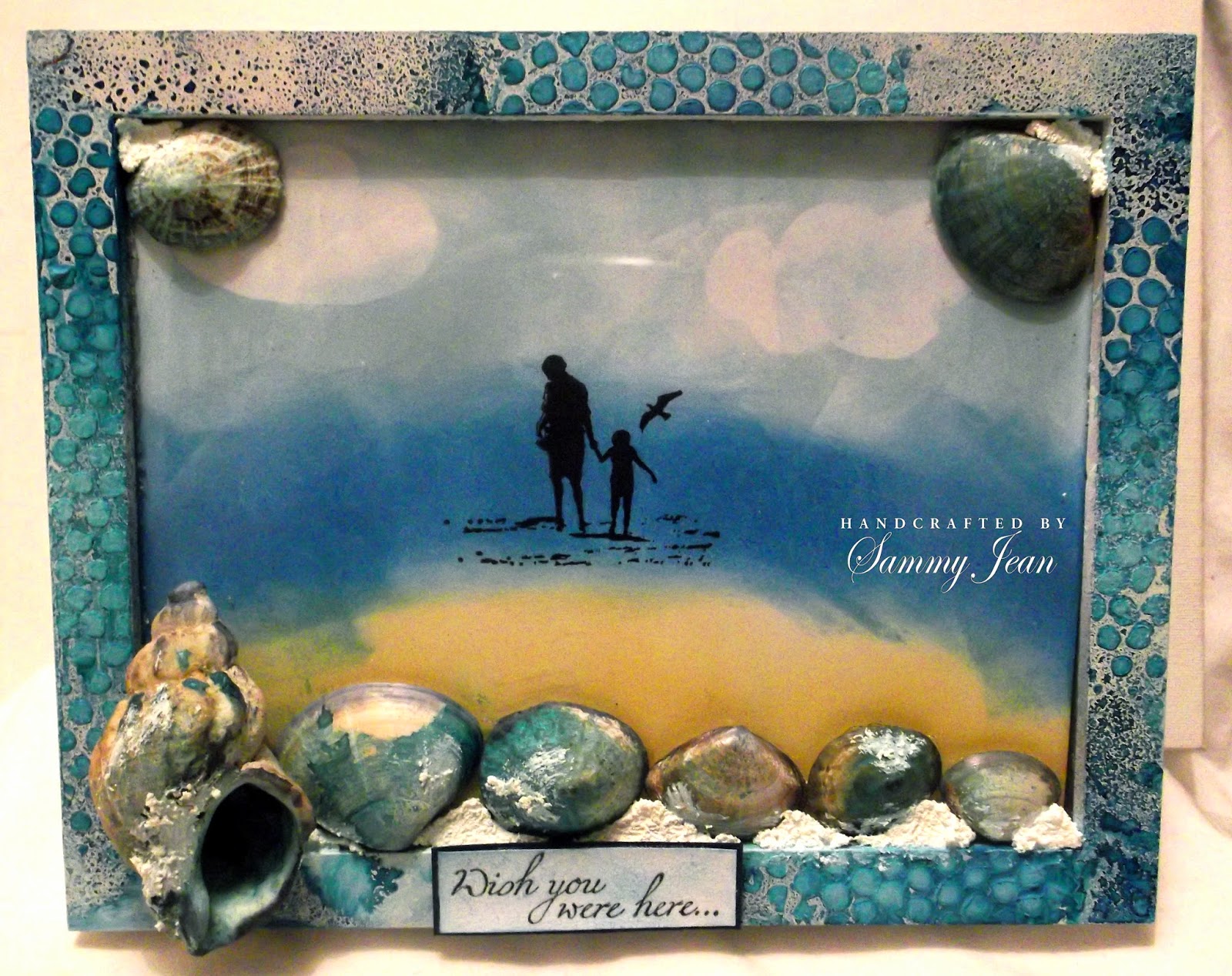 I used Snow Tex for the "sand" between the shells, which has a beautiful sandy texture.
You can see the lovely whelk in the bottom left corner. 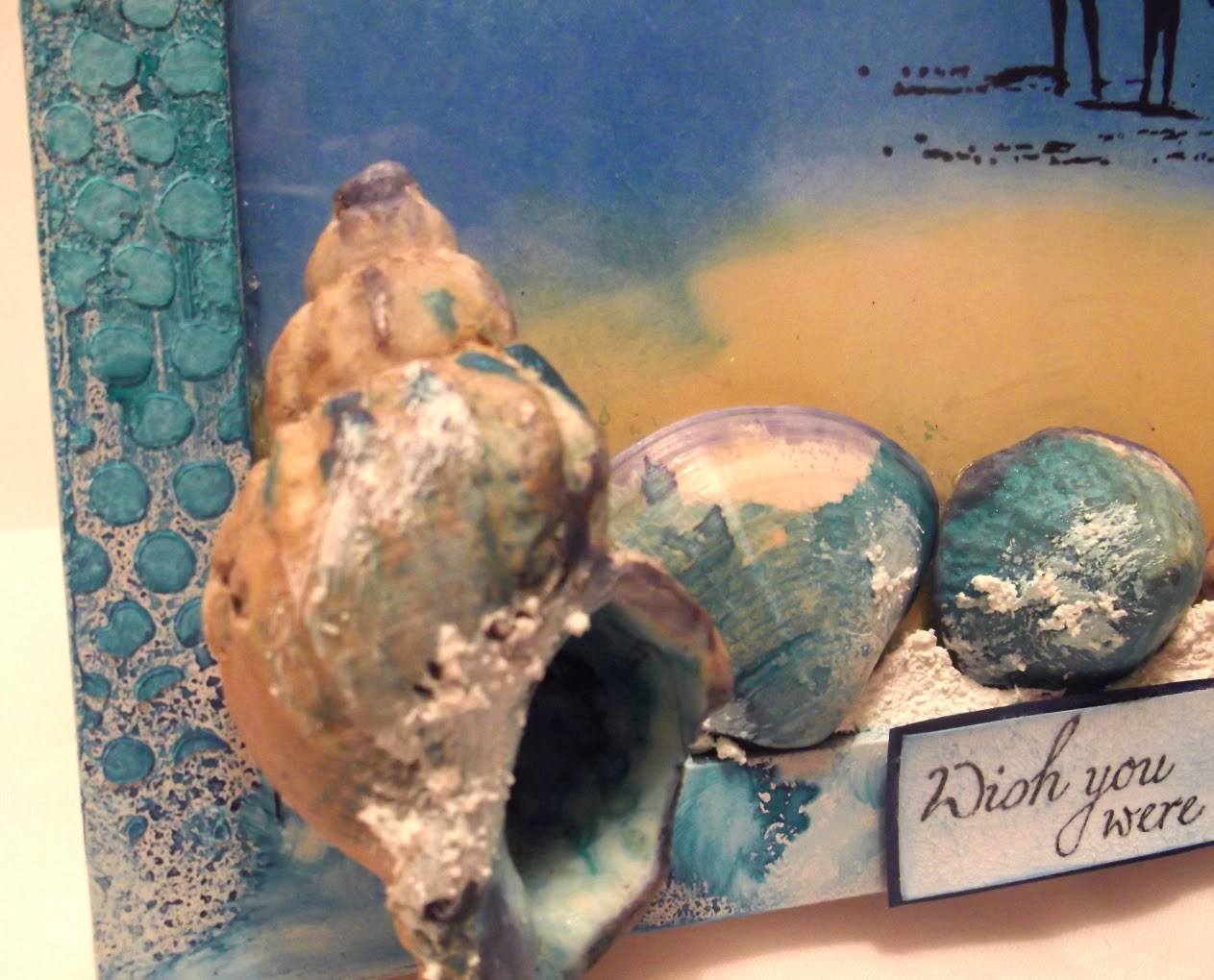 The "picture" I added to the frame is temporary, as I fully intend to take a picture (or 100) of the kids on the beach and then pop that in when we get back.

And this is what it looked like before, when I rescued it from the charity shop! 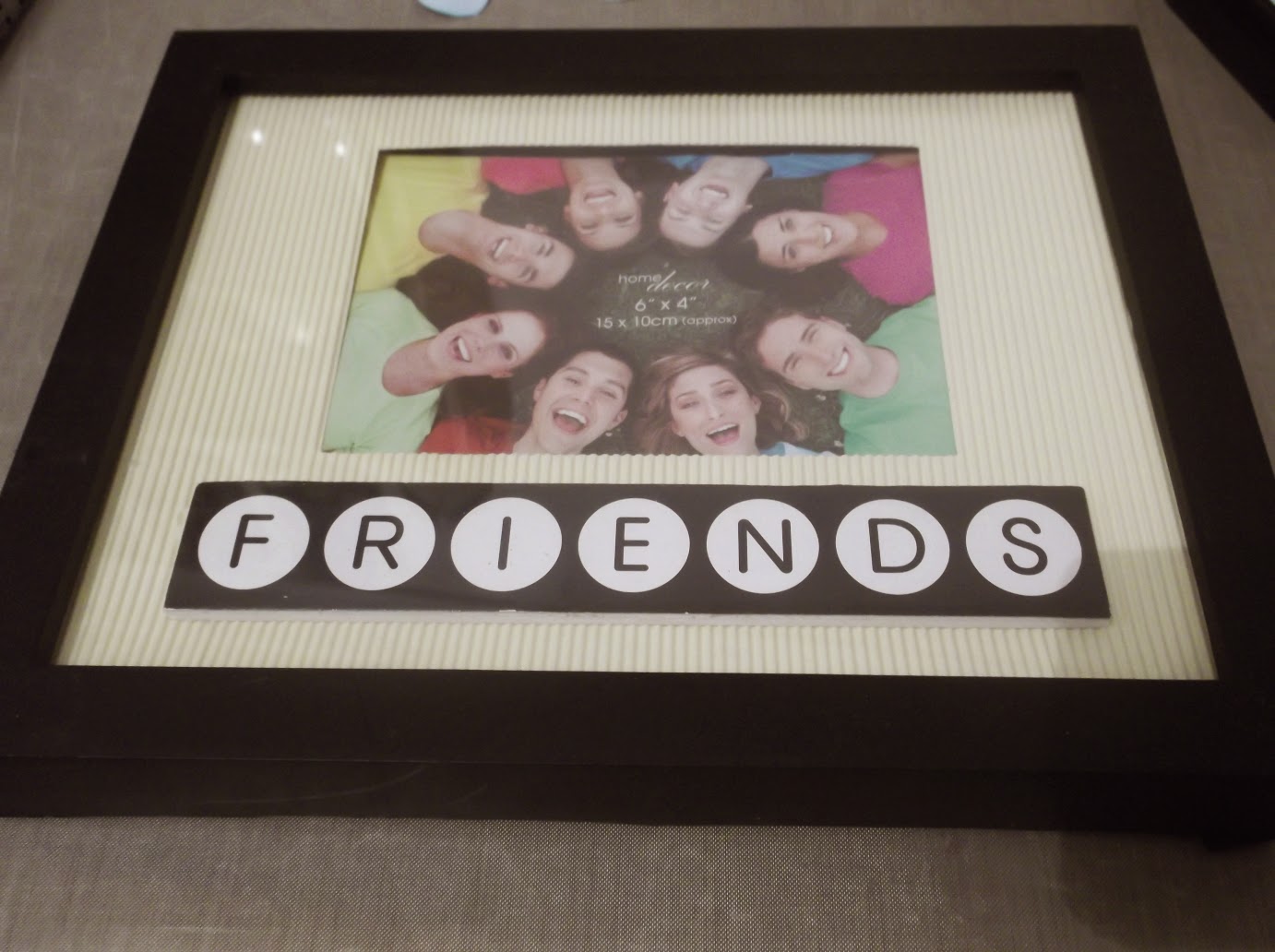 Please do go take a peek at the rest of the team's gorgeous creations this month!

Have a fantastic Friday!

We're really looking forward to our holiday to the seaside in a few weeks here at Casa de us, so I give you fair warning that today is going to be a very nautically themed day here on my blog, lol.

First up, there's the May challenge at Buckwells Crafty Challenge, where the theme is spots and/or stripes. as you may have guessed, I've opted for stripes!
Aside from the fact that they seem to work so well with a seaside theme, I must admit I'm rather partial to a good stripe or two. More so than spots, though I've nothing against those either (except, of course, when we're talking chicken pox and the like!).

So, I took my adorable image from sponsor A Lil Digi Heaven and put together this card: 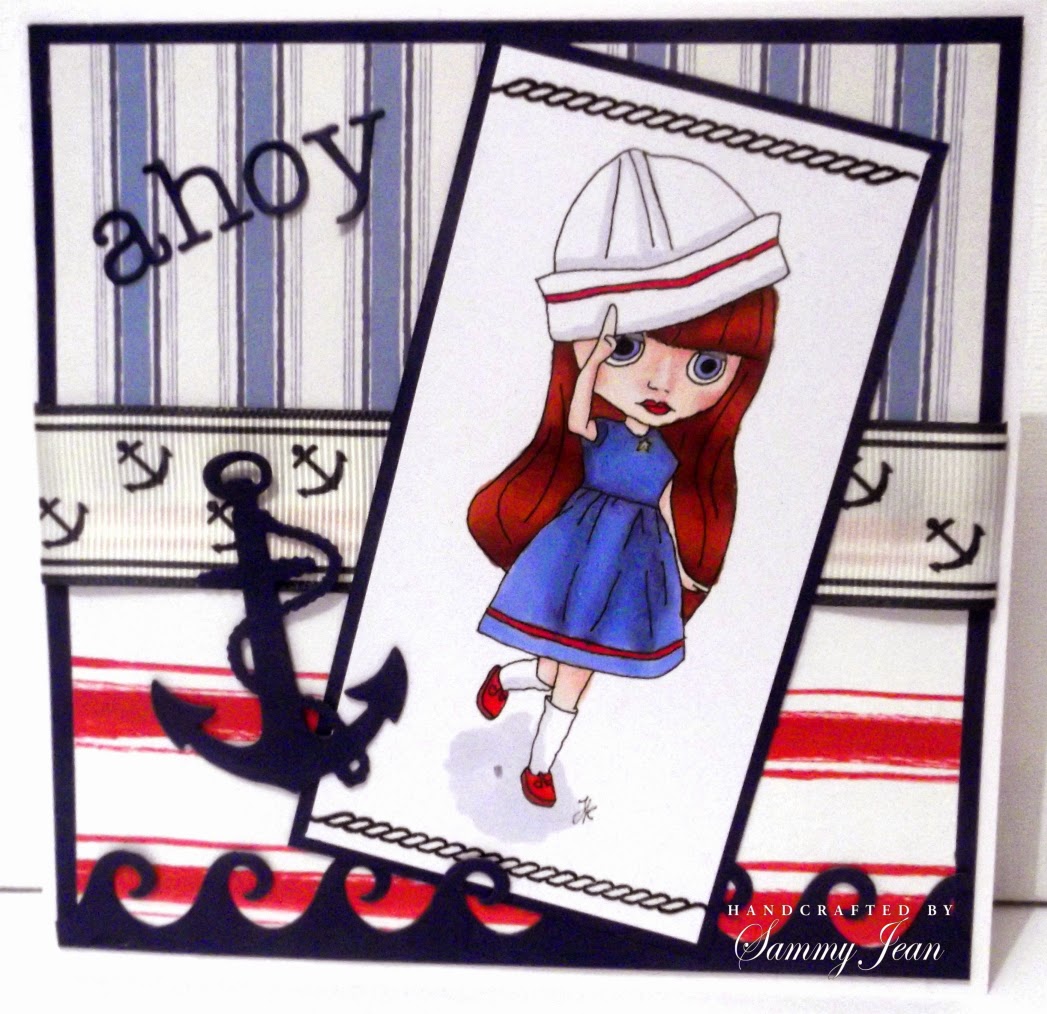 I want an outfit like that for our holiday!

Hope you'll come and play this month. All you need is some spots or stripes, or even both, easy peasy!

Right then, back in an hour with another sea-inspired make!