Sweet Stampin' DT - Black and white and one other colour

How fabulous was the Sweet Stampin' birthday bash last week? We had sooooo many great entries!
Let's hope for some more of the same calibre this week! The theme is BLACK AND WHITE AND ONE OTHER COLOUR. And we are sponsored by My Mum's Craft shop

With a £10 voucer for the weekly winner

And the ribbon girl is still offering the monthly winner a £10 voucher too!

Now, As some of you will know, today is St. Andrews day. St. Andrew just so happens to be the patron saint of Scotland, which makes today a special day for all Scots. Even those that have somehow been relocated to Leeds and have gotten stuck there! lol.
So, for me the choice was simple, and I made this... 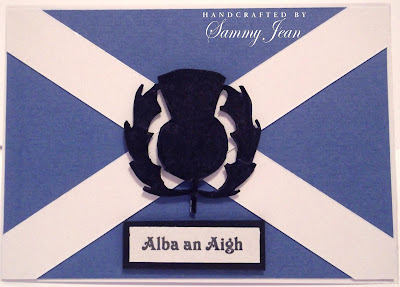 The background is the Scottish flag, also known as the St. Andrew's Cross, and the sentiment is Gaelic and means "Scotland the Brave".
Just a little bit of useless info for those of you that didn't know: The flag  people associate with the UK, the Union Jack, is actually an amalgamation of three different flags. The St Andrew's cross, England's St' George's cross (red cross on a white background) and Ireland's St Patrick's Cross (diagonal red cross - No, it's not green!). Put these three together and you have the Union Jack, the official flag  of the United Kingdom of Great Britain and Northern Ireland.

So, there you have it. If you want to pop over to the Sweet Stampin' blog, you'll be able to see the rest of the Sweeties' makes. Most of whom have chosen red as their other colour. I'm just a rebel, I am. ;-)

This is gorgeous Sammy, such a beautiful design.
I hope you are having a good weekend.
Sue xx

I certainly love this, it's different which I love and very much a passionate card....I am glad you agree with me re too many challenges...I don't have the time either to enter my card in over a few anyway....boy that's a chore on it's own....take care hon.xxxx

Have a lovely Sunday!