It's Saturday, which means a new challenge at Sweet Stampin', and this week team Fi got to play with the theme Christmas in July. Now I know that a lot of you might not want to think about the "C" word yet, but it's a good excuse to get started and help cut down on the last-minute rush later in the year :-)

I decided to use a new LOTV stamp I grabbed the other day when I found out it was being discontinued. I'm actually rather gutted, as they're discontinuing so many stamps at once (and my favourite paper pad!) and I can't afford to get them all before they go! *sob*
But at least I got this one, and a couple of others... 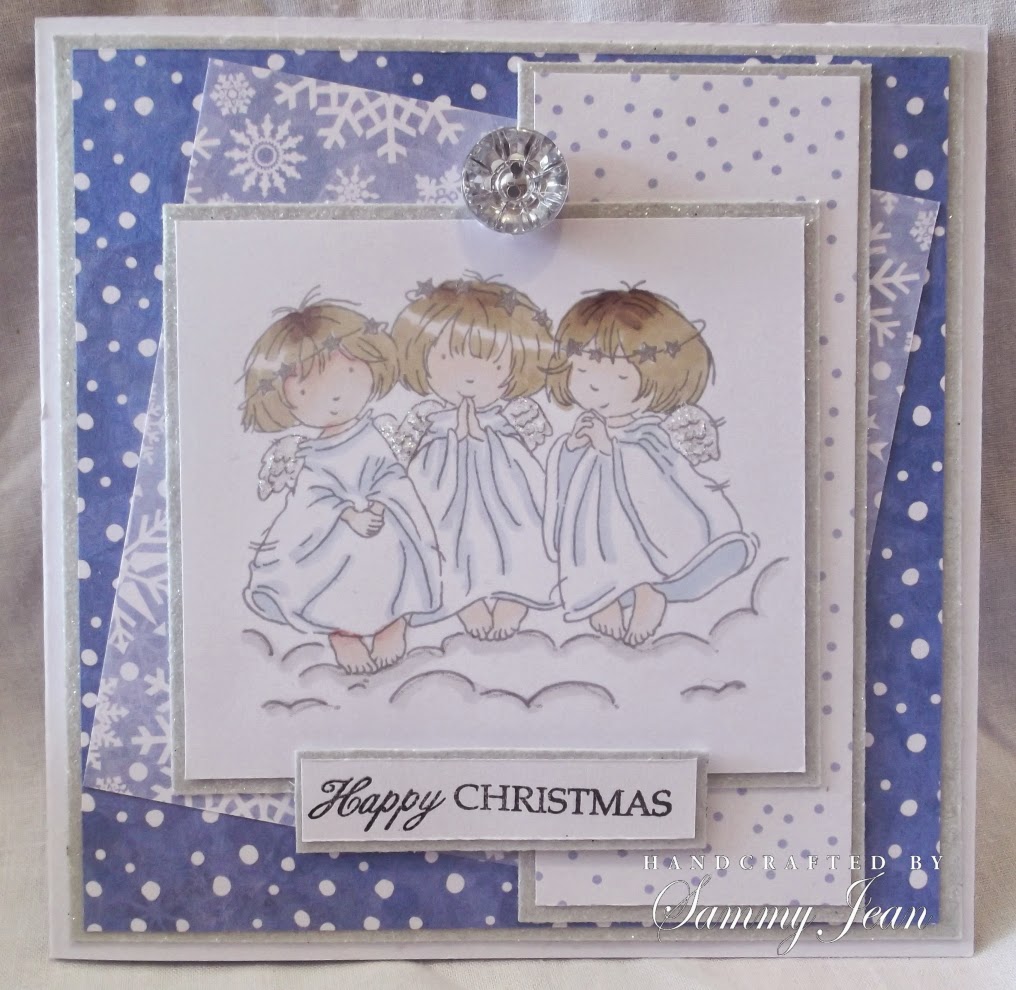 I teamed the stamp with some LOTV paper, and used white glitter card as a mat. There's Stickles on the wings, a hint of glitter on the clouds and the stars in their hair were coloured with a metallic silver pen, so all in all it's a very sparkly affair!
The sentiment is also LOTV, from the Simply Sophisticated set.

Now then, here's your chance to get a head start on those "C" cards, and come and join in with the fun while you're at it!

Either way, I hope you all have a fantabulous weekend.

So cute, and the pretty papers and sparkles suit the image perfectly. I didn't get this one, but did grab a couple and with the reduced price as well it was too good to miss xx

Beautiful card Sammy, I love it!!
have a great weekend
Kevin xx

Love blue and white on Christmas cards as it gives a really cool and frosty feel. Which LotV stamps are you after? I've got quite a few sitting here in a box waiting to go on Ebay - if I've got any of the ones you want you can have them as I need to make some room! Hugs, Tracey xx

Just let me know if there are particular stamps you are needing, or I can give you a (rather long) list of the ones which are looking for a new home. Tracey x

Christmas cards demand a bit of sparkle and it looks fab teamed with that beautiful blue and cute image :-)
Big hugs, Kat x

Oh what an absolutely gorgeous and adorable card.
luv
Debby

A gorgeous card Sammy. Blue and white is my favourite Christmas colour combo!!

I'm waving at you madly...didn't we speak at the LOTV birthday party, stood in that long queue to the tills??
If not then you'll think I'm a raving idiot!

Such a pretty card Sammy, thanks for entering our 'It Takes Two' challenge this month.

Anne xx
Lili of the Valley